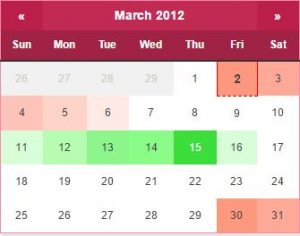 How to read this ovulation calendar?

Dates that are colored red represent the section of the month when your period starts. The first day is labeled with the darkest red, because this is usually the day menstrual flow is the heaviest. On average, a womans menstrual flow lasts from three to five days. Usually on the first day, the bleeding is the heaviest, and then it slowly subsides.

Dates that are colored green represent the section of the month when you are most fertile –  the time around your ovulation. The darkest green is labeled as THE ovulation day and this is the time you are considered most fertile. Since a womans fertile period starts about four to five days before actual ovulation, and ends approximately  24 to 48 hours afterward, there are several days that are colored green. All these days have a potential if you are trying to conceive.

According to the Shettles method, it is possible to determine a babys gender by timing your intercourse. The dark gray frame around the ovulation calendar dates determines the dates that are most appropriate for conceiving. If you would like to conceive a baby boy, the frames will appear around your ovulation day, but if you would like to conceive a baby girl, a frame will appear on the days preceding actual ovulation. If you have no preference regarding the gender of your baby, no frame will appear.

How do I calculate my fertile days using our free ovulation calendar?

To use ovulation calendars you need to enter:

Based on the data given, the free ovulation calendar generates your personal daily fertility chart.

For example, if your cycle is 29 days long and your luteal phase is 12 days long,  ovulation will occur on day 17 of your cycle (29-12=17).  Ovulation calendars use this formula to calculate your time of ovulation.

If you have a gender preference, simply select boy or girl from the gender field. The method used for gender selection is called the Shettles method. Dr Landrum Shettles claimed a 75 to 90 percent success rate for his simple at-home method, which advises how to time intercourse to conceive a boy or a girl.

**The Shettles Method is based on a theory of X and Y chromosomes. X chromosomes represent a girl and Y represent a boy. His theory is said to have 75 percent success rate with couples who want to determine baby’s sex, although as already said it should be taken with a bit of healthy skepticism.

The basic principle behind his theory claims that Y chromosomes (for those who want to conceive a baby boy) are smaller and more fragile, but faster comparing to X chromosomes that are slower, but also larger and more resilient and are able to survive longer when they are once released.

The time of ovulation is one of the most important things a woman should understand about her body since it is the determining factor in getting pregnant and preventing pregnancy. Ovulation is the most fertile period of menstrual cycle – it is a period when woman is most likely to get pregnant or when the chances of conception are the highest. Woman’s fertile period starts about 4-5 days before ovulation, and ends about 24-48 hours after it.

**What happens during ovulation?

During ovulation a single, mature egg (aka ovum) that developed in the ovary during the menstrual cycle is released from a follicle. When the egg is released, it is capable of being fertilized for 12 to 24 hours, and then it begins to disintegrate. Ovulation usually happens in the middle of the menstrual cycle, and if the released egg (ovum) is fertilized and successfully implants, woman becomes pregnant. However, if the egg isn’t fertilized and if woman does not become pregnant, the egg is passed from the reproductive tract during menstrual bleeding, which starts about two weeks after ovulation.

However, sometimes anovulatory cycles happen. These are menstrual cycles when no egg is released but when a woman does have her period. On the other, it is also important to bring out that woman can their get period (meaning menstrual flow does occur), but she does not ovulate. The ability to ovulate does vary from month to month, and can be delayed by a number of factors such as stress, illness, diet, or increased physical activity.

**What happens in the ovaries?

Woman has two ovaries and each produces many eggs during one menstrual cycle (which usually lasts approximately one month). Largest of the eggs is expelled into the pelvic cavity and swept into the Fallopian tube. There is no regular pattern between ovaries and it is fairly arbitrary which ovary will release the eggs.

Two hormones which create conditions conducive to fertilization are produced during ovulation: oestradiol and progesterone.

Oestradiol is produced alone by the developing follicle before ovulation and it stimulates the glands of the cervix to secrete fertile mucus and to stimulate the growth of the endometrium lining the uterus.

After ovulation, both oestradiol and progesterone are produced by the corpus luteum which forms from the ruptured follicle. Progesterone causes the abrupt change in the mucus which occurs immediately after ovulation and defines the Peak symptom. This hormone also prepares the oestrogen-primed endometrium for implantation of the fertilized ovum.