How to get pregnant while breastfeeding? 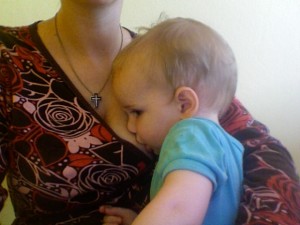 In the first six month’s of a baby’s life, getting pregnant again is well, almost inconceivable. Excuse the pun. Especially if you are nursing your baby on demand, around the clock, and your baby has not yet started solids, the stork is probably not going to come knocking on your door. Breastfeeding on demand, when used as a contraceptive method, has actually been shown to be more effective than any other birth control technique, including the pill, condoms, and mirena coils!

Does that mean that you have to wean before trying to conceive again? The answer is no, but it does mean that it is extremely rare for exclusively nursing moms to get pregnant again. Once the baby starts solids, and relies less on breast milk, there are better chances that the mom’s cycle will start again. The reason exclusive breastfeeding is such an effective contraceptive method is that it often stops ovulation from returning. Once the baby nurses less, and less often, you are on the road back to ovulating.

Many women get anovulatory periods for a while before starting their ovulation. So, even if you are menstruating it does not mean you are fertile. If you get a period, that is a good sign that things are happening, and this is a great time to start buying ovulation tests to see if you are reading to conceive.

Some lucky mothers happen to catch that first post-partum ovulation without ever having had a period. That sounds really wonderful, doesn’t it? I don’t know anyone who likes having periods, and the thought of being menstruation-free for a few years is definitely an appealing one. Conceiving during the first cycle after giving birth does not happen very often though.

If you are getting impatient, but still don’t want to wean, here are a few things you could try:

Because research has shown that women who are pumping are more likely to get pregnant than their directly breastfeeding counterparts, you could replace a few feedings with pumped breast milk.

The longer the period between feedings, the more likely you are to get pregnant. For some families, night weaning their child is a great solution, that drastically improves the odds of conceiving again.

Sudden changes in breastfeeding patterns have a greater effect than gradual ones. Cutting out one feeding could work wonders, but simply experimenting with the timing of your nursing sessions could do the trick too.

Of course, both you and your child have to be ready for changes like this. Patience is always important when trying to conceive, but even more so while breastfeeding. The good news is that the majority of nursing mothers trying to get pregnant do succeed, especially if they are charting and understand their fertility status.

What do you think? Did you manage to conceive a baby while breastfeeding? Are you still trying? Do you have any tips? We’d love to hear from you!