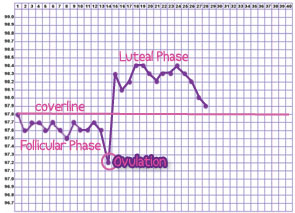 Monitoring the structure and color of cervical mucus is part of the wider routine of fertility charting. Fertility charting, also known as charting to conceive, is a natural method many women use to keep track of their ovulation, and the days prior to ovulation. It includes  measuring ones basal body temperature (as shown in the chart in the picture), and recording any other natural ovulation symptoms a woman has — tender breasts, ovulation pain, or even slight abdominal bloating are some examples.

Cervical mucus can also stand alone as a way to find out more about a womans menstrual cycle. Depending on the time of the month, cervical mucus contains more or less water, and other ingredients like protein and glucose. This is reflected in the appearance of the mucus, which can be thin or thick, and stretchy or cream cheese like. You collect a mucus sample by inserting two fingers. Then what?

After your ovulation is finished, your cervical mucus will thicken and change in color. If you notice a clay-like, non-stretchy mucus that is totally white in color and not see-through in any way, you can be fairly certain that this is post-ovulatory cervical mucus. At the same time, you might feel that your vagina is drier than during ovulation. If you conceived, you might even notice implantation bleeding.

What can you tell us about your experiences with this? Are you able to tell where in your cycle you are, just by looking at your cervical mucus? How do you do it?